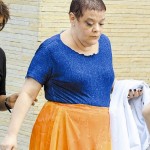 The next time you complain about your doctor, thank your lucky stars that at least you’re not a patient of Virginia Helena Soares de Souza, a 56-year-old physician in Curitiba, Brazil who is accused of killing at least seven terminally ill people in order to free up beds in her hospital. Even scarier is the fact that she convinced seven (SEVEN!) other medical professionals — three doctors, three nurses and a physiotherapist — in the Evangelical Hospital to help her carry out the fiendish plot.

The group allegedly killed the victims using a two-pronged approach: first, using a “drug cocktail” of painkillers, sedatives and anesthetics to increase the patients’ reliance on respirators, and then by restricting the oxygen levels in those ventilation devices, causing them to die from asphyxiation. De Souza was the head of the intensive care unit (ICU) at the hospital and was quoted in recorded telephone conversations as stating that the crowded conditions in the ICU were making her “itch” and that she wanted to clean up the “clutter.”

She and her seven cohorts are charged with murder and are awaiting trial. Investigators believe the total number of victims could rise much higher and are combing through the 1,700 deaths that occurred at the hospital between 2006 and 2013, the years of de Souza’s deadly activity. Around 300 of those patients were under her care. De Souza has pleaded not guilty.

Throughout history, some of the most prolific serial killers have been medical professionals who have easy access to helpless victims. These so-called “angels of death” include: