Eye Jewelry: The Latest Implant You Probably Shouldn't Get 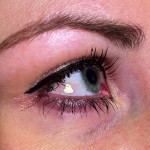 Just when you thought humans had run out of different medical ways to alter their bodies, along comes eye jewelry. This isn’t a run of the mill eyebrow piercing, mind you; it’s a piece of metal implanted IN THE EYEBALL. It’s enough to make you shed a tear.

The procedure has been done “hundreds” of times in Europe and reportedly only once in Los Angeles (for an unnamed celebrity) before spreading recently to New York City, where ophthalmologist Emil Chynn, medical director of Park Avenue Laser Vision, became the first doctor in the city to perform it. Chynn, who frankly has a dubious track record of personal decision making (see his well-documented searches for a wife and a personal assistant/masseuse), has coined the jewelry he offers “SafeSight Jewelry.”

SafeSight Jewelry comes only in platinum, because it has a lower chance of allergic reaction than gold, and options for shapes right now are seemingly limited to just a heart or a star. If you decide after the fact that you chose the wrong one, however, fear not: you can get an implant switched for a mere $1,000. (The initial procedure costs $3,000.) The jewelry is less than one millimeter thick and is curved to match the curvature of the eye. Chynn imports his platinum implants from Holland, where the medical procedure was invented.

The process involves first numbing the eye with anesthetic eye drops. Then, the doctor cuts into the eye to create just enough space to fit the jewelry beneath the conjunctiva, the clear layer of skin that covers the eye. Because the implant is beneath that layer, you don’t feel it when you blink. The surgery takes only a few minutes, and while there may be some discomfort afterward, it should ease up once the incision heals. The first New York patient, Lucy Luckayanko (who got a heart), was back at work within two days.

According to Chynn, there have been no significant medical complications in patients who’ve had the process done in Europe, and although he admits that there is a small risk of scarring and infection (which he says can be contained with antibiotic and steroid eyedrops), he insists there is no risk of vision loss. However, the Food and Drug Administration (FDA) has yet to approve eye jewelry, and the American Academy of Ophthalmology (AAO) advises people to “avoid placing in the eye any foreign body or material that is not approved by the FDA.” The AAO adds that there is not “sufficient evidence to support the safety or therapeutic value of this procedure.”

If you end up getting some “bling” on your eyeball and have buyer’s remorse, the good news is that Dr. Chynn will remove the jewelry within the first year for free. Even after the first year, removal is a relatively inexpensive $300.