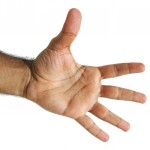 The latest plastic surgery trend in Japan focuses on lines in the skin, but not in the location you’d think. Rather than adjusting the lines on someone’s face, this medical procedure places hands — and more specifically, palms — under the knife. And the reasoning isn’t what you’d expect either. It’s not about beauty, but rather something much deeper: destiny. In a society in which many people value palm reading as a method of fortunetelling, some Japanese think that medically altering their palm lines can change their futures.

Takaaki Matsuoka, one of the pioneers in the procedure in Japan (It has previously been offered in Korea.), began performing palm surgery in 2011and has since improved the fortunes of 20 patients. The clinic in which he works has performed another 17 such operations, even though it doesn’t advertise the option. Other plastic surgery facilities in the country have a similar low-key approach to the medical procedure, which is rarely promoted (perhaps due to the less-than-scientific reasoning behind it) but whose popularity has spread by word of mouth.

The surgery, which costs around $1,000, has to be performed using an electric scalpel, because burning of the skin is necessary to form a line, and lasers don’t leave clear enough marks once they heal. Typically it involves burning between five and 10 lines, sometimes tracing pen drawings made by patients — although in Matsuoka’s case, he double-checks to make sure the lines do indeed mean what the patient thinks it does (to prevent bad luck for the patient and a bad reputation for the doctor).

According to Matsuoka, men tend to want to change palm lines related business success, like the “fate line, the money-luck line and the financial line.” Women, on the other hand, are more concerned with improving their romantic fortunes by adjusting their marriage line or romantic line.

Whether or not the procedure actually works as intended is debatable. Although a number of patients have contacted him to let him know about their successes — some got married, others won the lottery — Matsuoka himself thinks any improvement in fortune is largely due to the placebo effect. Basically, if you think positively enough about your future and are willing to go to such extremes to make it better, there’s a good chance good things will happen. But as long as palm surgery exists, there will be plenty of Japanese people who aren’t willing to leave it to chance.