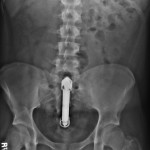 As proof that it wasn’t all a hoax, Grawly provided photos of the emergency room, the CD-ROM containing his x-ray and of the actual x-ray itself, all of which cemented the opinion that this is just entirely too much information. Let’s hope he thinks twice before taking to Twitter to detail some nasty body fungus or a particularly difficult — or in his case, shockingly easy — bowel movement.