News Flash: Drinking 100 Cups of Tea a Day for 17 Years Is Bad for You 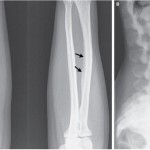 The bone disease caused by too much fluoride is called skeletal fluorosis, and while it’s very rare in the US, it’s common in developing countries like India and China that 1) have high levels of fluoride in their drinking water (due in part to the use of deeply dug wells), 2) consume large amounts of tea and 3) rely heavily on coal (which contains fluoride). Skeletal fluorosis attacks bones and joints, causing pain and in extreme cases, deformities. On the bright side, it can sometimes be reversible if fluoride intake is stopped, given fluoride is naturally excreted from the body in urine and bone can repair itself. In the Detroit woman’s case, the fluoride crystallized on her bone, causing increased spine density and calcification in her arm. Upon ceasing her tea habit, her symptoms improved, but doctors warn it can take years before skeletal fluoride is depleted.

And she has a lot of it to deplete. According to estimates, for the past 17 years, the patient’s intake of fluoride was more than 20 milligrams a day — about seven times the recommended daily allowance for an adult woman. When measured, the level in her blood was four times the normal amount, although at that point, it’s surprising her blood wasn’t 100% tea.