Report: Half of Swimming Pools Have Poop in Them 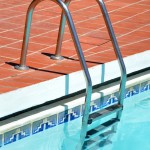 Sometimes you wish the Centers for Disease Control and Prevention (CDC) would just keep things to themselves. The federal agency, which oversees national public health, recently released the results of a study conducted last summer on Atlanta-area public swimming pools that found that more than half — 58% to be exact — contained E. coli bacteria. And because E. coli come from the lower intestine (“coli” referring to colon), its presence is a red flag for fecal contamination. After all, you can’t spell “pool” without “poo.”

The report points out that fecal matter can find its way into a pool not only when someone defecates while in the water (sorry, those children’s swim diapers don’t do much beyond preventing floaters), but also simply when fecal remnants wash off a swimmer’s body. The most potent manner of transmittal from body to water, not surprisingly, is by way of (ugh) diarrhea, which is hard to contain even in the best of circumstances. As disgusting as it sounds, most strains of E. coli are actually not harmful, but the ones that do cause harm can lead to stomach cramps, nausea, (even more) diarrhea and other illnesses, so the CDC is taking this opportunity to advise swimmers to take the following precautions:

These steps could help go a long way to slowing down a recent surge in what the CDC calls “recreational water illness” (RWI).

While the chlorine in pool water does kill E. coli, the CDC report shows that’s it’s not necessarily 100% effective, especially if the chlorine and pH levels are not maintained properly (which apparently is often the case). However, much more resistant to chlorine than E. coli is Cryptosporidium, a parasite found in fecal matter that can produce the same sort of symptoms as E. coli.

And if you think you’re off the blame train because you pee in the pool rather than poop, think again. The CDC reports that the nitrogen in urine — and even sweat — depletes the chlorine potency, not only making it less effective at killing bacteria, but also forming compounds that irritate the eyes, nose and throat. Now try to swallow that.