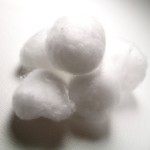 If you type the words “cotton ball” into Google nowadays, one of the first phrases to pop up is “cotton ball diet,” which should be all you need to know about how popular a trend this is. That’s right; more and more people are actually eating cotton balls in order to lose weight. The thought behind this wacky trend is that these densely packed objects make you feel full without eating a lot of food. It’s something that has been going on in the weigh-obsessed model industry for years but has broken through into the mainstream this year, perhaps spurred by an interview that model Bria Murphy (daughter of Eddie) gave to Good Morning America in which she said she’s heard of peers who eat cotton balls dipped in orange juice in order to stay thin.

Since then, young women and girls eager to emulate their role “models” have increasingly adopted the technique, using a variety of juices or even smoothies to provide taste and lubrication. While some people use it as an appetite suppressant before eating a meal, others reportedly use the cotton balls — typically no more than five in one setting — as their entire meal.

Unfortunately for those who practice it, the cotton ball diet is as dangerous as it is popular. It should go without saying that eating anything that’s not designed for human consumption is medically unsafe, but cotton balls are more toxic than you’d think. That’s because many cotton balls are actually not made of cotton at all. Unless you’re using pricier organic cotton balls, chances are the ones you’re eating are made of chemical-filled, bleached polyester fibers. Over time, this can lead up to a buildup of toxins in the body that can damage internal organs.

Even if the cotton balls consumed are all-natural, however, they still have the capacity to cause plenty of harm. For one thing, they could get stuck in the throat, causing the dieter to choke and die if they aren’t dislodged. Another danger is that the cotton balls can cause a potentially fatal blockage in the intestinal tract — known as a bezoar — which can lead to dehydration and a buildup of waste material, damaging the organs and requiring surgery to fix. Even if the cotton balls work as intended — that is, reducing the amount of food eaten — this approach can lead to malnutrition by depriving the body of the vitamins and minerals it needs, leading to potential medical problems down the line.

There are a lot of crazy diets out there, but the cotton ball diet is more troubling than most — not just because of how dangerous it is, but also because it could be an indication of an eating disorder like anorexia or pica, a condition in which people crave non-edible objects.