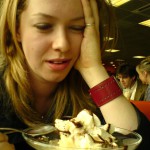 Chances are you know a picky eater or two. Maybe you’re one yourself. But imagine if your pickiness was an actual medical condition that made the thought of eating almost any food as disgusting as eating dirt or bugs. That’s the world in which people suffering from an eating disorder know as Avoidant/Restrictive Food Intake Disorder (ARFID) live.

ARFID was identified relatively recently, having been added to the American Psychiatric Association’s Diagnostic and Statistical Manual of Mental Disorders in 2013. In order to be diagnosed with ARFID, someone’s condition must meet a specific set of criteria:

1. The person experiences an “eating disturbance” (a lack of interest in food, repulsion based on how food tastes/looks/smells/sounds/feels, fear of how eating might affect them, etc.), causing at least one of the following:

2. The disturbance is not better explained by lack of available food or by a “culturally sanctioned practice.”

3. The disturbance isn’t caused by anorexia or bulimia, and there is no evidence that there has been a change in the person’s perception of their body image.

4. The disturbance is not caused by another medical condition or mental disorder.

Previously, the disorder now known as ARFID was called “Feeding Disorder of Infancy or Early Childhood,” which specified that it was a childhood affliction that often faded with age. However, not everyone outgrows their “picky eating,” and in extreme cases, adults with ARFID have been known to limit their diet to one specific food item, such as fries or bagels.

Sufferers are typically very particular about how their food should be prepared, and they experience phobia-like anxiety when forced to eat (or even just when they see or think about) new foods. To some, a food’s look or feel reminds them of something inedible, like worms or bugs, while others feel like eating certain foods or textures will make them choke to death.

Because ARFID is such a new diagnosis, there have been few studies conducted to reveal the cause, a typical prognosis or effective treatment options, but relaxation exercises, nutritional counseling and antidepressant medications have been shown to work in some cases.