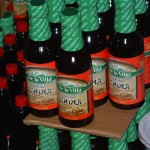 It’s doubtful that whoever came up with the phrase “too much of a good thing” was thinking about soy sauce, but apparently you can indeed have too much of that delicious soybean-based condiment. As proof: an article published in The Journal of Emergency Medicine reported that an unnamed 19-year-old Virginia man slipped into a coma after drinking a quart of soy sauce on a bet.

After drinking more than one-third of a pound of the sauce, the man began having seizures and was rushed to the emergency room. He was given anti-seizure medication but within four hours of ingesting the liquid, he went into a coma and was admitted to the University of Virginia Medical Center in Charlottesville, Virginia for “intentional massive sodium chloride ingestion” — basically, ingesting too much salt. He experienced a condition called hypernatremia, or an excess of salt in the blood, which causes water to seep out of body tissues into the bloodstream to dilute the excess salt. The problem with this is that when water leaves the brain, it can shrivel up and bleed, causing the patient to slip into a coma.

The treatment the teenager received involved pumping gallons of sugar water into his body via a nasal tube. His sodium levels returned to normal within five hours, but he remained in a coma for three days before waking up. His brain initially showed some side effects from the ordeal, but within a month, there were no signs it had ever happened.

Believe it or not, soy sauce overdoses aren’t unheard of; apparently, it usually occurs in people with psychiatric conditions that cause them to develop a craving for the condiment. According to the report, this case represents the most salt anyone has ever ingested without any lasting neurological problems. His doctor thinks the reason his recovery went so well is because his system was flushed out quickly and aggressively.

The report states that sodium overdose used to be a popular method of suicide in ancient China; whether or not it involved soy sauce (which has been around since the 2nd Century BC) is unclear, but there are certainly worse ways to go.